Well, that depends on the weight of the star. For the heaviest stars, the next life event is a dramatic one: they explode! Astronomers call the explosion of a star a ‘supernova’. These explosions often create beautiful objects – like a pretty butterfly emerging from a caterpillar’s cocoon. Astronomers call these objects ‘supernova remnants’.

Look at the wonderful colours and texture in the supernova remnant shown in this space photo. These objects aren’t only stunning when viewed close-up: A single star that explodes as a supernova can give off as much light as an entire galaxy that contains hundreds of billions of stars!

Yet, there is still little known about the details of how a supernova occurs. Studying a star before it goes bang – and becomes famous across the Universe! – will give astronomers important clues about these explosions.

Now, a team of astronomers say that’s exactly what they think they have done. If the discovery is confirmed, this will be the first pre-supernova star ever discovered!

During a supernova explosion, material from the star is flung outwards at incredibly high speeds – up to 30,000 kilometres per second! That’s only about 10 times slower than the speed of light!

This Space Scoop is based on a Press Release from Royal Astronomical Society.

This Space Scoop is based on a Royal Astronomical Society Press Release. 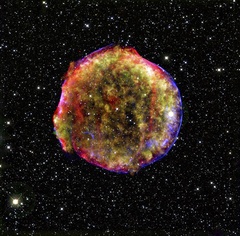