Did you know that sugar contains some of the essential ingredients for life? That doesn’t mean that eating lots of sweets is healthy. However, sugar is made up of a simple recipe of chemicals called carbon, hydrogen and oxygen. And almost all life on Earth is made up of these three chemicals, plus another one, which is called nitrogen.

Now, using a powerful telescope, a team of astronomers has spotted sugar in the gas surrounding a young star that is like our Sun. Sugar has been seen in space before, but this is the first time it has been found so close to a Sun-like star. (The distance between the sugar and the star is the same as that between our Sun and the planet Uranus.) And since sugar contains the ingredients for life, finding it near a Sun-like star is very exciting – maybe life could exist on another planet in the Universe!

The astronomers have also found that the sugar is moving inwards, towards the star. “The sugar is not only in the right place to find its way onto a planet, but it is also going in the right direction,” says astronomer Cécile Favre.

Get involved: What would you observe if you were in charge of one of the most powerful telescopes on Earth? Well, to celebrate its 50th birthday, the European Southern Observatory is asking everyone to vote on what object its impressive VLT telescope will observe! Click here for more information. 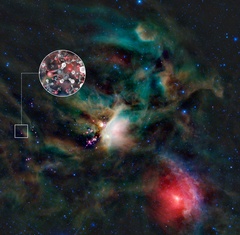