It’s not just slang words, like “sick” and “wicked”, that can mean something completely different to what you would normally expect. For example, take this new picture of an object in space called a planetary nubula – it actually has nothing at all to do with planets!

A planetary nebula is an object that forms when a star like the Sun (our nearest star) runs out of fuel. When this happens it starts to collapse inwards. The star also loses its outer shells of gas, which float off into space. The gas creates beautiful patterns around its former star, like the one shown in this new photo.

The “nebula” part of the name makes sense, as this word just means “cloud” in an old language called Latin. But why is this object called a planetary nebula? Basically, when these objects were first discovered, astronomers thought that they looked similar to how the planets Uranus and Neptune look in small telescopes. And, well, sometimes names just stick!

Some planetary nebulae (when you talk about more than one nebula, you call them “nebulae”) have two symmetrical clouds of gas on either side of the central star. They look like colourful butterflies in space! 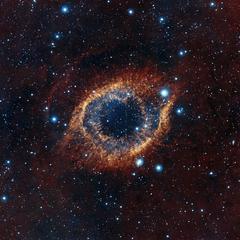