A quick search on Instagram reveals over 350 million pictures posted with the hashtag “selfie”. But none of them hold a candle to the selfie NASA received this week from the InSight spacecraft on Mars!

The photograph was taken shortly after InSight landed on Mars on 26 November, after a six month flight. The picture shows part of the spacecraft and the dusty surface of the red planet behind.

InSight landed right on target on a large, flat plain close to the Red Planet's equator (halfway between the North and South poles). The area is so flat and empty it’s been nicknamed the "biggest parking lot on Mars". This is exactly what NASA wanted.

Landing on a large rock or a steep slope could have spelled the end for InSight, causing it to tilt or tip over. Plus, the spacecraft has no interest in the cliffs and valleys on Mars’ surface.

Unlike the rovers of the past, it will be digging deep below the ground to study inside the planet. An instrument named a “mole” will burrow itself five metres beneath the surface in search for buried secrets, like how much heat is coming from the planet’s core.

Another instrument, about the size of a volleyball, will measure tiny movements caused by landslides, dust storms, meteor strikes, and even so-called “Marsquakes” (which are like earthquakes).

Working together these instruments will provide us with a picture of the inside of Mars, similar to the way an ultrasound lets doctors "see" inside a human body.

This will help us figure out all kinds of things, like how rocky planets like Mars and Earth formed and how they’ve changed over time. Insight might even provide clues about where life comes from — and maybe even how it can disappear.

With its oceans, weather and human activity, our own planet is constantly changing and it’s history is long-lost. But Mars has remained pretty much the same for millions of years, giving us a clear view to the past.

InSight wasn’t alone on its journey to Mars, it was joined by two hitchhikers: “Wall-E and “Eva”. These two tiny satellites sent messages back to Earth during Insight’s daring landing, letting us know all was well.

This Space Scoop is based on a Press Release from Europlanet Research Infrastructure. 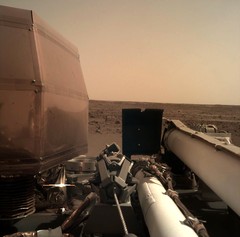