You can build some pretty amazing things simply by sticking blocks of lego together. People have made life-sized lego houses, lego rockets and even lego ships! Just like these impressive lego structures, humans are built of tiny pieces too. Human building blocks are called organic molecules (MOLL-eh-kyools).

Unlike lego, molecules are so small that nobody can see them, except with extremely powerful microscopes. They are made up of chemicals like carbon, hydrogen and oxygen. Organic molecules have been found all over the Universe.

Now, no-one knows how life began on Earth 3 billion years ago, but one thing is certain; it all began with these tiny organic molecules.

But if organic molecules are the building blocks of life and they exist all over the Universe, why have we still not found life beyond Earth?

This new-born star doesn’t yet have any planets, but it is surrounded by a disc of planet-making material that will soon form into planets. It is in the outer edge of this disc, where the solar system’s icy comets will form, that astronomers found the organic molecules.

In a few millions year, newly formed comets from the disk’s outer regions will start to rain down on the planets. And the organic molecules may be carried with them. Who knows what kind of things could be built when they land?

Some scientists think that it was comets that brought organic molecules to Earth in the early days of our Solar System!

This Space Scoop is based on a Press Release from ALMA. 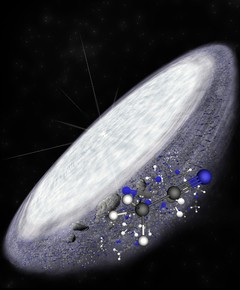