Did you know that you're made of stardust? It's true, we all are, and so is the Earth! Almost everything is made up of materials that were formed in the centre of a star.

Anything that wasn't made in a star, is made from the same material as stars — gas planets, like Jupiter and Saturn, for example. Once you know that planets are made from the leftover material around forming stars, this makes sense!

When a star is born, deep in a cloud of gas and cosmic dust, any leftover material forms a disc around it (like Saturn's rings). Small grains of rock inside the disc then collide and sometimes stick together, making bigger and bigger objects. This is how planets are born.

The more material the planet pulls in, the bigger it grows. But planets are very messy eaters. As the giant gas-guzzling planets feed, they pull in gas from the disc in long streams.

It's almost impossible to see planets forming themselves, because the gas and dust in the disc hides them from view. But, using a giant, powerful new telescope called ALMA, astronomers have spotted these gas streams flowing through the planet-forming disc of a young nearby star!

Since there's more than one stream, there's probably an entire group of these planetary giants are being born!

Did you know our Solar System has four gas giants of its own? They all lie in the 'Outer Solar System', beyond Mars. These are Jupiter, Saturn, Uranus and Neptune. Jupiter is the biggest. 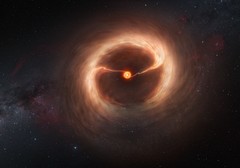