Some people are in great shape at the age of 90, while others are frail by 50. How people age isn't just down to how many years they've been alive, how they live has a massive impact. Smoking, drinking alcohol and eating bad food can make you look years older and live years less. It turns out that the same is true for star clusters!

Globular clusters, like the one in this space photograph, are groups of stars tightly bundled together by gravity. They form very quickly, so all the stars are created at around the same time. The stars in this picture are some of the oldest in the entire Universe. They formed almost 13 billion years ago and the Universe itself is only 13.7 billion years old! Now astronomers have come across something very strange hidden deep in the hearts of these giant old star cities: young stars!

But it turns out that these mysterious youths are actually old stars, too. They've just been lucky enough to be injected with a second youth. When two old stars collide or merge together, material is transferred. One star gains extra fuel from the other. This bulks the star out, making it heavier, and heavier stars fall inwards to the centre of the cluster. The new fuel also allows these stars to shine brighter, giving them a deceivingly youthful appearance. Mystery solved!

Globular clusters used to rule our Galaxy. Back when it first formed, there were probably thousands of globular clusters roaming around. Today, there are only around 150 left! So, it's lucky some of these stars have been given a new lease of life. 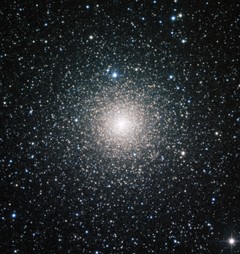