The single-cell organism known as slime mould (Physarum polycephalum) builds complex web-like networks in search of food, always finding the best path to its next meal. Similarly, in shaping the Universe, gravity builds a vast cobweb-like structure that ties galaxies and clusters of galaxies together along invisible bridges hundreds of millions of light-years long.

Astronomers from the United States have discovered this special resemblance between the two networks, one that is crafted by biology and evolution, and the other from the force of gravity.

Inspired by how slime mould behaves, the astronomers designed a computer algorithm, which is essentially a recipe that tells a computer precisely what steps to take to solve a problem. This algorithm helped them map a large scale structure of the universe.

This Cosmic Web is what was the team of astronomers are trying to study and visualize using data from the NASA/ESA Hubble Space Telescope, with some extra help from the behaviour of slime mould.

The cosmic web is the large-scale backbone of the cosmos. It is mostly made up of dark matter and laced with gas, upon which galaxies are built. Even though dark matter cannot be seen, it makes up the most of the Universe’s material.

If the Milky Way galaxy was a sesame seed, then the cosmic web of the observable universe would be the size of the Great Pyramid of Giza. 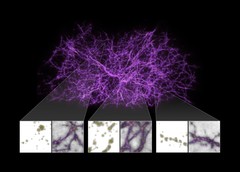