Have you ever looked at yourself in a funhouse mirror or a spoon? It’s fun! Depending on the shape of the mirror, it can make your face look really weird.

Every curved mirror creates a warped view and strongly curved lens (like glasses lens) can do the same thing. Even in space we find distortions, and this is caused by what’s known as a ‘cosmic lens’.

This image was taken by the NASA/ESA Hubble Space Telescope, which shows us a very strange view of a very distant galaxy. The galaxy isn’t distorted because they used a curved mirror or a special camera lens, but because the distant galaxy was observed through a cosmic lens.

The galaxy in this picture is really far away and it is nicknamed the Sunburst Arc. Between the distant galaxy and Earth is another galaxy. The gravity of the galaxy closer to Earth warps the path of the light coming from  the more distant galaxy. This is how a cosmic lens works and it is why we see these banana-shaped curved lines in the image.

But how? Massive structures like galaxies and clusters of galaxies can bend the light from objects behind them with their strong gravity as we see here.

This phenomenon is called gravitational lensing and you can watch a cool animation about how it works here.

Not only does this lensing technique distort what we see, but it also copies it and makes it brighter! The cosmic lens makes different images of this galaxy imaged here between 10 and 30 times brighter and has copied the galaxy 12 times in the 4 arcs that we see. 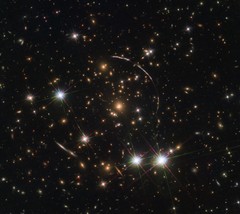