There's a rule in nature: the more beautiful something is, the more deadly it is. For example, the most colourful animals, insects and flowers are almost always the most poisonous. Things are no different in space. This new space photograph shows a pink bubble of gas glowing against a shining field of stars. Well, this pretty cloud is another of nature's dangerous beauties—it's shooting out huge amounts of intense, deadly radiation!

The glowing cloud of gas and dust in this picture is called a 'Superbubble'. Superbubbles are found in areas where lots of massive stars have formed fairly recently. These baby stars blow out intense winds, and massive stars 'live fast and die young'. They speed through their lives to explode as powerful supernovae. It's these destructive events that have carved out the centre of the cloud, leaving behind just a ring of gas and dust.

The chaos taking place inside these giant super bubbles stretches far beyond the hollowed cloud in the form of dangerous X-ray radiation. Scientists have discovered that this particular cloud gives off 20 times more of these intense rays than they expected! So, here's another example of something that's beautiful but might be deadly! My advice is: always enjoy beautiful things from a safe distance!

This superbubble is lurking inside a nearby dwarf galaxy called the Large Magellanic Cloud. Yes, you guessed it; dwarf galaxies are tiny galaxies, the smallest known is 20 million times smaller than own galaxy, the Milky Way!

This Space Scoop is based on a Press Release from Chandra X-ray Observatory. 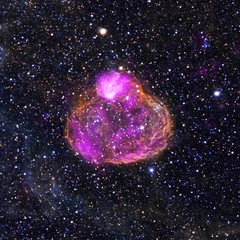