When you’re posing in front of a tourist attraction on holiday, sometimes people walk in front of the camera and ruin the picture. Astronomers experienced the same thing, only this time they photographed a dwarf galaxy, and a globular cluster blocked the view.

But unlike annoying tourists, globular clusters are actually very interesting. A globular cluster is a collection of old stars that orbits a galaxy. It contains many strange space phenomena, such as vampire stars that suck matter from neighbouring stars. Or tiny stars that spin extremely fast: in just a few seconds they spin a thousand times around themselves!

This particular globular cluster is orbiting the Milky Way — our home galaxy. Although it is far away, it still appears as big as the Moon in the night sky. A ray of light would take 120 years to go from one side of the cluster to the other.

Light travels faster than anything in the world, so you could say that this cluster is enormous! It is one of the largest and brightest globular clusters we know of, and is even visible with the naked eye. From the Southern Hemisphere you can see it next to the Small Magellanic Cloud — the dwarf galaxy the astronomers were initially photographing.

Astronomers are lucky that the globular cluster insisted on being on camera, as they can now study it in detail. It helps them to figure out how this oddball jumble of exotic objects could have formed.

The globular cluster is full of objects shining with X-rays. This is the same radiation your doctor uses to see if your arm is broken! 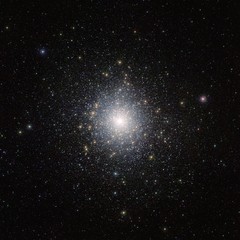